Workout of the week : put your chest to the test

The chest is often a problem area for aspiring bodybuilders and beach showboaters alike. A symbol of masculinity and authority,  the chest  needs special attention if you really are to develop it fully. Here’s how…

Today we’re going to look at some exercises that might seem counter-intuitive for beginners but actually provide very good results. Before continuing, please leave your misconceptions at the door, because the chest workout that is detailed here bears little resemblance with what you’ve been taught by your PE teacher.

Benchpress exercises are overrated. period. Due to their very form, they foster rear deltoid and triceps development instead of targeting the pectorals effectively. During the negative phase of a typical benchpress movement, the pectorals are fully stretched, I’ll give you that. Problems arise during the positive phase of the movement: since there’s no proper contraction of the pectorals one against each other it is very difficult, even for an advanced athlete, to mobilize all the desired muscle fibers.

Instead, supporting muscles like the delts and the triceps will carry the bulk of the resistance, thus nullifying the very purpose of a bench press exercise.

Here are movements that put less stress on peripherals areas, mobilize the pecs more effectively and are generally way better at developing upper and lower chest, rather than the almost exclusively side pectoral development seen in bodybuilders that make bench press their basis for chest training.

If you have trouble feeling a pump when doing chest, this exercise is for you. By crossing your arms as pictured above, you’ll have more control over the movement but will also mechanically contract both pectorals against each other, something that a typical bench press movement can’t do simply because your arms always stay parallel.

This is not a power exercise however, so don’t overload the cables, keep your back straight and your abs tight. Control the movement from start to finish without giving any momentum to the movement.

Over time, you’ll notice a way better contraction and you’ll be able to incorporate power movements like the seated flies : 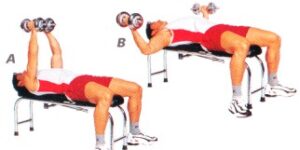 The dumbbell flies provides the same pectoral stretch as the bench press, without the associated load. Slowly depress the weight until you feel you’ve reached maximum amplitude, then go back to position A, closing your arms as if you were hugging a big tree. This way more inner pectoral contraction can be achieved.

In order to turn this exercises into a power movement (a movement that will give you more strength and mass), instead of spreading your arms as widely as possible, turn your wrists as though your were handling a bike and keep your elbows close to your body.

Again, this movement is superior to the bench press, because you’ll be able to lower your elbows much deeper than with a barbell, which is limited due to its straight shape. Curved barbells exist to alleviate this issue though.

Last but the least, the decline press is your weapon of the choice in the war of perfect chest development. In order to get a rounder, fuller chest, it is very important that you spend some time working on the lower section of your pectorals.

The exercise shown above is a great tool, but if you need more control over your pec contraction, you’ll want to have your palms face each other. This way you’ll be able to contract your chest even more. Form is obviously very important in this slightly acrobatic exercise.

There you have it: 3 simple yet powerful exercise that’ll make you want to stay away from the ‘mythical’ bench press. Many fitness professionals and gyms in Bangkok swear by the bench, but here at the Aspire Club, we like to think that the least treaded path if often the most rewarding.

Test these exercises asap and let us know what you think! Reach out and discuss the challenges you face right here @fitcorpasia. Our pro tips are just a tweet away!

— PreviousNutrition : a look at the Bangkok expat diet
Next —Success Mindset : Exercise as a Catalyst

Plan And Track Science Based Results

5 Ways to Boost Your Energy Levels

Energy is essential in this sleep-deprived, high-speed, modern world. Here are 5 simple ways to recharge your batteries and...

How to Master a Flexible and Flow Approach to Nutrition

How to achieve flow and flexibility in your nutrition so you never have to follow another diet all meal...

Why You Need Minimum Effective Dose….

Another key principle we have optimized with our clients is the MED. Minimum Effective Dose…. It’s a clinical concept...

At ASPATA we focus on education and key strategies to be successful in the fitness industry. Beyond theory, our education is based on implementation to develop world class coaches that thrive on client success.

Join the ASPATA Mailing list for new release courses, discounts and news to develop your career as a fitness professional.

Get 20% Off your First ASPATA Course

Evolve as a World Class Coach

Get Access to free strategies and tools to build your successful career in the health and fitness industry.